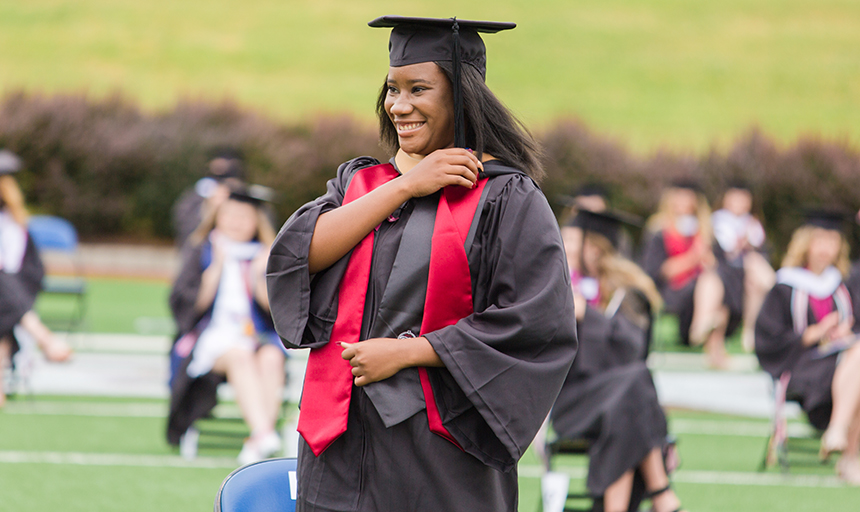 Class of 2021 walks across the commencement stage

“Your experience is unique,” Roanoke College President Michael Maxey said. “Your encounters with the normal and abnormal have been unique. Use your uniqueness to reach amazing heights. Use your experiences to treasure and appreciate normal daily living. Use your experience to know that you can handle abnormal challenges in life. You’ve already done so. Godspeed all of you, Class of 2021. We appreciate and celebrate you. Do well in life, do good in life, find purpose in life.”

Four members of the Class of 2021 earned valedictorian honors, the most ever. In both 2019 and 2020, there were three valedictorians.

The 2021 valedictorians are Eric John Lee, an actuarial science major and economics minor from Archbald, Pennsylvania; Olivia Sara Samimy, a literary studies major and communications minor from Fredericksburg, Virginia; Abigail Elizabeth Workman, a mathematics major and Spanish minor from Roanoke, Virginia; and Stephanie Marie Zemba, a sociology major with a concentration on gender and women’s studies from Greensburg, Pennsylvania.

“We all took on a challenge just by staying in college during a global pandemic,” Eric Lee said in his valedictory address. “But we made it, and we now know how to adapt to strange situations. We know we can do more than we probably ever thought we could do before. We should all be confident in our ability to overcome whatever else is thrown at us after today.”

"We’ve been through a very hard year and we honestly don’t know what tomorrow is going to bring," Abigail Workman, from Roanoke, said. "This is what I’ve learned through my years of schooling. When things got tough and there are too many assignments … when I was discouraged and the future seemed so uncertain ... I was tempted to give up but then I prayed for strength. And I remembered one of my favorite verses that says “I can do all things through Christ who strengthens me.”

Read more about the valedictorians and salutatorian in this story.

Lee followed his interests and was involved in the Roanoke College A Capella Choir, the Wind Ensemble, the Roanotes a capella group, theater, garden club and the Alpha Phi Omega National Service Fraternity. He also did an Honors project about locations of craft breweries and pubs. Lee is the first actuarial science major to earn the valedictorian honors. The major was created five years ago.

Olivia Samimy has taken advantage of every opportunity that has come her way, from fascinating research to studying away from campus. In addition to being a research assistant for Mary Crockett Hill ‘91, assistant professor of English, Samimy is an Honors program graduate and has worked for the Roanoke Review literary journal since she was a sophomore. She also participated in the Lutheran College Washington Semester Program, interning in the nation’s capital at Generation Progress.

Abigail Workman combined her passions into an unusual pairing of studies: mathematics and Spanish. In addition, she worked at the Fintel Library for three years; served as an officer with the Math Club; worked as a Spanish Cohort Leader; and worked with Iris Myers, a lecturer and Language Resource Center director.

Stephanie Zemba, who is graduating in three years, came to Roanoke with a plan in mind and executed it to perfection. Along with her studies, Zemba was involved with several research projects through the Research Fellows program, Summer Scholars, and independent studies. She also worked as the sociology department assistant. Her Summer Scholars project was about the way religion comforts immigrant elders. Zemba was accepted into the American Sociological Association Honors Program and presented her research at the ASA’s annual conference in 2020.

Destinee Dawn Harper, a Spanish and literary studies major from Harrisonburg, Virginia, is the Class of 2021 salutatorian.

Harper has pursued an international set of interests at Roanoke. She majored in literary studies and Spanish, and attended a Fulbright Summer Institute at the University of Sussex in England. She works as a volunteer coordinator for Casa Latina, a local nonprofit that provides resources to the Roanoke Valley’s Spanish-speaking population. She also served as chapter president of Sigma Tau Delta, an internationally-recognized English honor society and interned at DC Fray Magazine. Through her experiences with Casa Latina and her own background, Harper penned an essay that won the Office of Multicultural Affairs’ Bonilla Legacy Essay Contest. 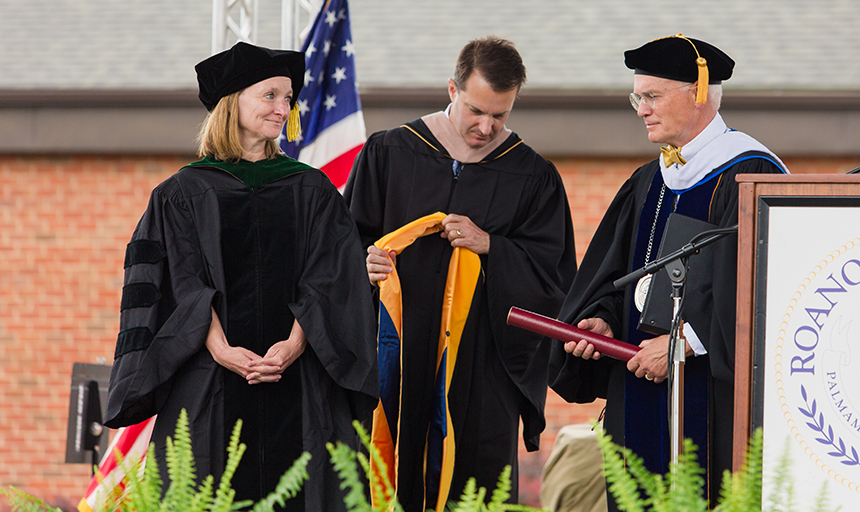 Dr. Cynthia B. Morrow received the honorary degree of Doctor of Science. Morrow is health director of the Roanoke City & Alleghany Health Districts of the Virginia Department of Health. She also serves as co-leader for Health Systems Science at Virginia Tech Carilion School of Medicine.

For Dr. Morrow, assuming leadership of the health districts came at an astoundingly critical time. Virginia’s health districts had been thrust into the role of preparing for and responding to the COVID-19 crisis, standing at the forefront of confronting outbreaks and mitigating the spread of infection.